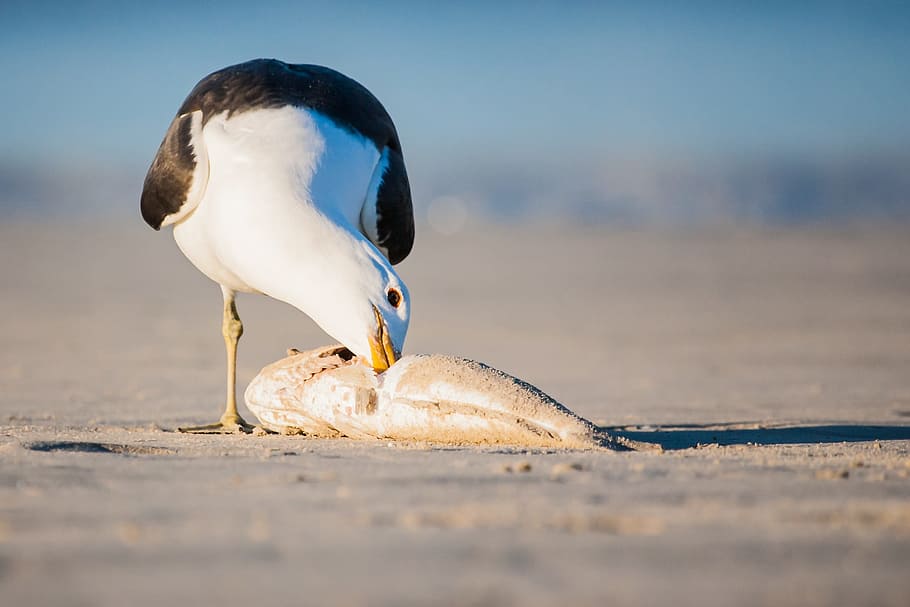 How to identify a Kelp Gull

The Kelp Gull is a medium-large bird, about 60cm (23in) in length and weighs in at around 1 kilogram (2.2 lbs). The male and female have the same plumage, but the male will be slightly larger.

It is white with black back and wings. The bill is bright yellow with a red spot near the tip and the eyes are dark grey-brown with an orange ring.

The immature/juvenile kelp gull (also shown in my video below) is initially a mottled dark brown with a paler barred rump. It can be mistaken for a skua, but lacks the white patches at the primary bases. It has an all yellow bill.

I filmed this video on shores of a beach in the Eastern Cape of South Africa. It features both and adult and a juvenile feeding on a fish.

Kelp gulls are omnivores. They will scavenge for any availavble food, especially behind fishing trawlers and at dump sites.

They will also hunt for small prey.

They are aggressive predators on the offshore islands; they use every available opportunity to rob Cape Gannets, cormorants, African Penguins, terns and Hartlaub’s Gulls of their eggs and small nestlings.

The penguin and the Roseate Tern are the two birds in particular they that cause the most problems for.

They have also been seen feeding on live whales! They use their powerful beak to peck down centimetres into the whale’s skin and blubber, often leaving the whales with large open sores. These sores have been recorded to be as big as half a meter in diameter.

They breed in Namibia and South Africa and are both sea and freshwater birds. They are found along coasts and especially near harbours.

For the nest they make a small depression in the ground and they line it with plant leaves and feathers. The female will lay 2 or 3 eggs and then both parents feed the young birds.

The White Pelicans are a big predator of theirs and they do eat the Gull chicks.

The southern African population of Kelp Gulls is estimated to be around 11 000 pairs with the bulk of them (approximately 9000) in South Africa and 2000 pairs in Namibia.

And even though this total population is far smaller than that of the African Penguins (approximately 180 000), they are not regarded as threatened. This is because the penguin population is steadily decreasing at a rate of about 2% per year, while that of Kelp Gull is on the increase.

People will often refer to these birds as Seagulls.