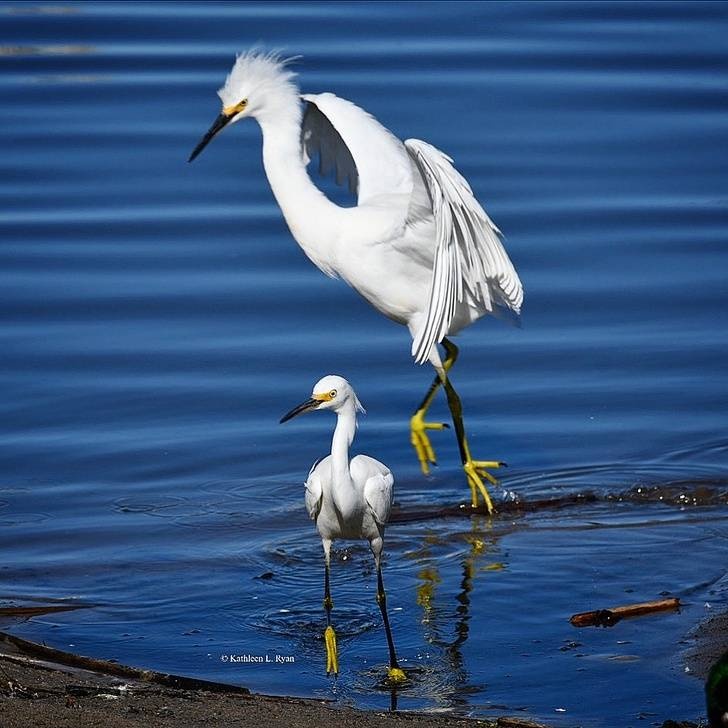 Submit your own birding story here.

One of my favorite places to go birding near where I live is,  Laguna Grande Regional Park, in Monterey, CA, USA. It’s a wonderful place to bird watch, where you’re almost guaranteed to see several different species of birds if you walk around the main trail which is about 1.3 miles.

On the morning of December 10, 2019, I was about to witness some drama unfold that I’d never seen before. As I was standing on a footbridge at one end of the park, I saw a small Snowy Egret –  (Egretta thula), fly into the area and observed it for about fifteen minutes.

I saw it walking around to several different places, and at each site it would stand in the water, and shake one of its feet to scare up any fish that might be nearby.

I also saw it unfold its wings a little to shade the area of water it was fishing in to improve visibility to try to see if any fish were present. It kept moving around the area, engaging in this behavior, but it didn’t have any luck catching a fish.

All of a sudden, a much larger Snowy Egret appeared. From the moment it arrived it started to chase the smaller egret around the entire area, where I was observing them.

Round and round they went a few times, with the larger egret getting very close to the smaller egret, several times.

I saw them run, hop, and do small flights during the chase. The smaller egret eventually flew away after ten minutes of constantly being harassed and chased.

I continued to observe the larger egret try its luck at fishing, but it also went hungry, as there seemed to be no fish around. What an exciting morning of bird watching!

About by Kathleen L. Ryan, who is a member of the Birding Planet Facebook group:

In 1988 I took the best trip of my life; a photo-safari to east Africa where I visited Nairobi National Park, Amboseli, and the Masai Mara in Kenya, and Ngorongoro Crater, in Tanzania.

My passion is photographing wildlife and birds, and sharing those images in hopes of bringing enjoyment to others. I’ve had 30 photographs accepted into the photo-library of, “World Wildlife Fund”. Currently, WWF is using my Black Rhinoceros photo online at their website and in January my “Lion Pair Conflict,” was chosen for their Photo of the Day.

Most recently, I’ve been honored by having my, “Snowy Egret Chase,”  story and photographs chosen for publication, here at the, “Birding Planet,” website.

All photos in this post are taken by the author.

You can get your own birding story published here.