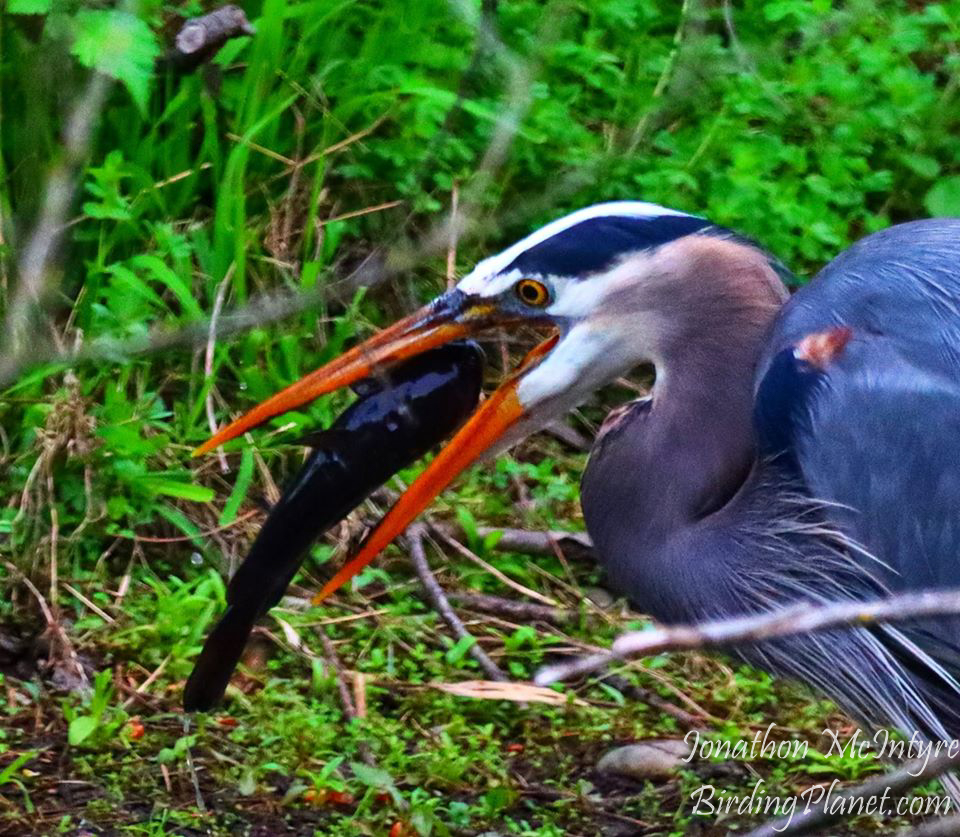 Their conservation status is listed as Least Concern.

Their populations are quite widespread and on the increase and therefore do not require special protection.

As a migratory species, they are protected under the United States Migratory Bird Treaty Act.

Their fishing method is simple, but highly effective. The Heron stands as still as possible in shallow water. When a fish swims close by, the Heron shoots out his long neck and snatches the fish.

Occasionally the heron will move around slowly in the water looking for an ideal fishing spot, but most often they just stand still and wait until a meal, in the form of a fish, frog , turtle or snake, comes within its reach.

They will also forage on the shore either looking for edibles in floating objects or stalking prey such as  insects,  other birds and rodents.

They will hunt in both the day and the night.

Below is a video of the Heron in its Hunting and Fishing environment:

In North America and Central America it is commonly found near most shores of open water and in wetlands.

It is also well populated in the Galápagos Islands and the Caribbean.

These Herons breed in colonies.

Once the male has found the ideal site for the nest he displays there to attract a mate.

His displays usually involve him stretching his neck to full length, he will:

* stretch his neck up with his bill pointing to the sky

* fly in circles above the colony with his neck fully extended.

The nest site is usually in trees, but it can also be on the ground if there are no known predators nearby.

The nest itself is a platform of sticks and it is built primarily by the female, while the male collects most of the material.

Full HD Video of the Heron in various situations

Personal Observations of this Heron

The Great Blue Heron is quite prevalent in the southwest corner of Iowa. They can be seen in just about any body of water in our area: ponds, lakes, creeks, even water out in fields after a flood. Anywhere that they can find fish, amphibians or crustaceans to eat,  herons can be found.

They form rookeries around here too. The rookery that we found was near the Loess Bluffs. They had built their nests high near the top of mature cotton wood trees.

They tend to be solitary unless it is breeding season for them. I’ve seen a number of them in close proximity to one another at an old rock quarry that has been turned into a park in our area. Herons are very elusive. Any sudden movement or approaching them too quickly will cause them to take flight. They are not comfortable with humans close by.

And John Tuttle submitted this video of the Great Blue Heron walking near the water and then taking off in flight. He filmed it in Cherry Valley, Illinois.